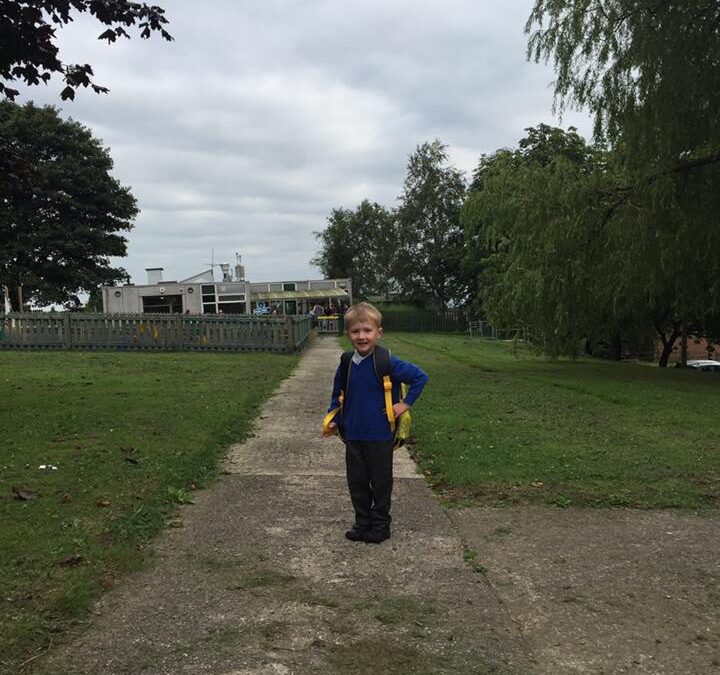 The kids have been back to school for a week or so and, if you are anything like me, your plans of a cool, calm and stress-free September have long been forgotten.

The new school year always starts with the very best of intentions. The children will have a proper breakfast, every morning and you will lovingly make their pack lunches every day. By the time the morning of the sixth school run comes round you’re shoving custard creams in their hands as you bundle them in to the back of the car and you’re throwing bits of lose change at them so they can buy lunch at school.

School uniform will always be clean, and hanging up in the wardrobe. You brought extra for those “just in case” moments, but yet, here we are, one week in and you’re scrambling around on your hands and knees performing the sniff test on grey pinafores and short trousers as you pick them back out of the laundry basket.

Let’s not kid ourselves, no matter how ready you, or the kids, for that matter, were for the return of school, it doesn’t take long for it to become a living nightmare again. One you will have to repeat for at least the next six weeks before you get another break. If it’s any consolation October isn’t that far away.

I keep thinking there has to be another way though. The daily school run doesn’t have to be a monumental battle against time, played out against a soundtrack of “I said put your socks on” and “turn that TV off!”. I’ve done some research, and apparently there are some helpful tips to make life just that tiny bit less complicated.

Try them out and let me know how you get on.

#1 – Lay out the clothes the night before

OK, so it’s been a long day and frankly you’re just grateful to have survived it. The kids are bathed and in their PJs and you can hear that glass (OK, bottle) of Pinot calling your name.

You want to sit down and veg out, and no one can blame you BUT if you can take just a few minutes now to lay out all the kids’ clothes for tomorrow morning, you will be thankful. Especially if you discover they don’t have anything clean – you might just get it washed and dried by the morning if you start now.

#2 – Sort out the inevitable school admin

With the return to school comes the return of letters, notes, leaflets and financial demands. There is always a trip, a cause, a Birthday or some other event you have to contribute to, so make sure you find the time to deal with it. Apparently doing it the night before, and having everything ready in the relevant bags, is a step in the right direction.

Having had to raid a young child’s piggy bank looking for £4.25 in exact change for a school trip, mere minutes before we need to leave the house, I can certainly get on board with the logic of this one.

Some of us just aren’t morning people. Sadly, there isn’t a lot you can do about that when you have to get up for the school run, but find that thing that makes you a little more human, and make time for it. Maybe it’s a cup of tea, a toasted bagel, or just a hot shower. Whatever it is, fit it in to your morning schedule and you’ll thank yourself for it.

Admittedly, “just” five more minutes in bed is probably what you’re really craving, but that’s just going to lead to you having less time and more chaos. Have a cuppa instead. Maybe even a Mr Kipling’s (I recommend an almond slice, personally).

We’ve all heard it (and no doubt wanted to slap the person saying it), “fail to plan and you’re planning to fail”, or something like that anyway. Apparently it’s the same with the school run. One of the tips I kept coming across was making sure you have a morning routine, but more importantly than that, sticking to it.

OK, so that is definitely easier said than done, but it is good advice. No one wants to start the day in a bad mood, and they definitely don’t want to be seething by the time they drop the kids off at school. It’s not a good look for anyone.

Remember, everyone has bad days, and the best laid plans can most definitely go pear shaped at the drop of a hat (certainly when kids are involved). So don’t beat yourself up over it if you happen to be late once in a while, or things haven’t gone perfectly. You’re human!