Lapland – the search for snow and Santa 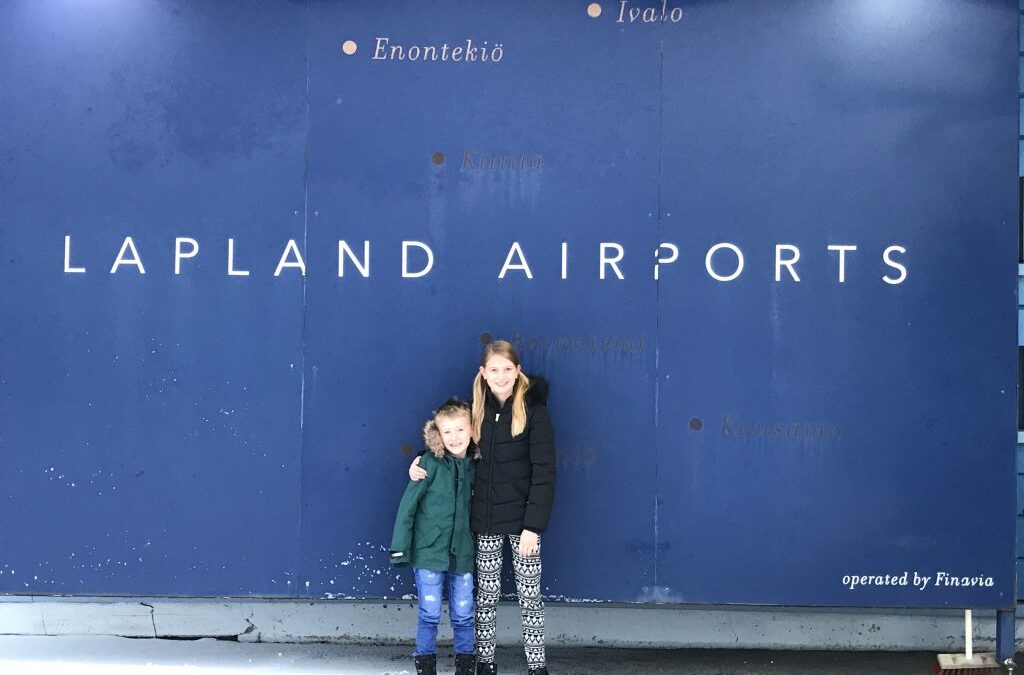 As a newborn and Children’s photographer in Chesterfield, Derbyshire, my main job, is not just to take photos, its  to create memories that you will cherish for years to come.

I absolutely believe that creating memories with your family should be the top of our priority list. After all, when you are gone, wouldn’t you like your children to have wonderful memories to look back on?

Each and every year myself and my husband think of ways we can create amazing memories with our Children. (See my next blog about how we are doing that this Christmas).

Earlier this year I panicked, my daughter was turning 10 and I was fearful that she was beginning to loose the magic of Christmas. She had already started coming home telling me so and so said Santa isn’t real (even at one point a trainee teacher dropped that bombshell. Well it took a lot to convince her he was mistaken).

So what did I do?

I booked a 3 day trip to Lapland!! 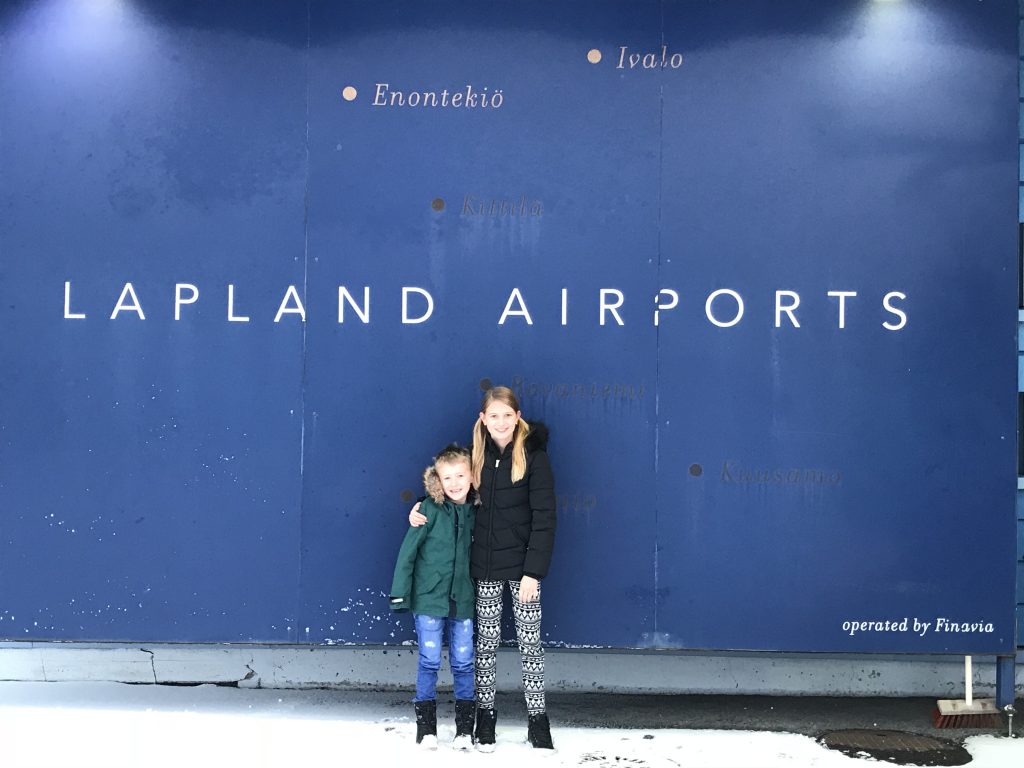 Yes it was expensive (almost as much a week in a Spanish resort), but we had always said we wanted to go, but kept putting it off. I knew if we didn’t do it now, my daughter wouldn’t experience the magic Lapland had to offer.

I cant begin to tell you the stress this 3 day trip has caused me.

I’m sure you are all aware, from the news and social media that 2018 has been the mildest winter in around 60 year. This meant the snow did not arrive late November and at the start of December, there was still no signs of snow. In fact at 2 degrees C it was far too warm for snow.

The media was very quick to report this and panic set in, not only with us but with every other family due to travel.

I must give credit to TUI as they promised that they would either move us to an area with snow (Finland, which is where Lapland is, is a massive place and the distance between resorts can be like one being in London and the other in Newcastle), move our dates later to in the year (or even move it to 2019) or give us a full refund).

I became obsessed with watching the weather apps and live web cams for our area. I would check them several times a day.

At one point we had a few days of snow, then just as here in the UK we had a temperature spike, so did Lapland. All that wonderful snow, that everyone was overjoyed to see, was washed away within a day with a downpour of rain.

Again, TUI were amazing assuring us that they would look after us if there was no snow.

And once again we were all back to weather watching.

Finally after me and the kids (and about a thousand other people) all did the snow dance. The weather Gods finally made it snow.

So on the 9th of December (just a few days after Freya’s 10th birthday) we boarded our TUI Santa flight to see the big man himself.

Right from the minute we arrived at the gate TUI made the start of our journey magical.

The staff were all wearing festive hats or jumpers and the lady that announced boarding, told all the children that the reindeer were all harnessed and ready to go and that Santa was getting excited to meet us.

The flight staff were just as festive and made the flight fun for all. We sang Christmas songs and each child was given a beautiful Christmas activity pack, which included paper for them to write a letter to Santa as well as colouring and games. 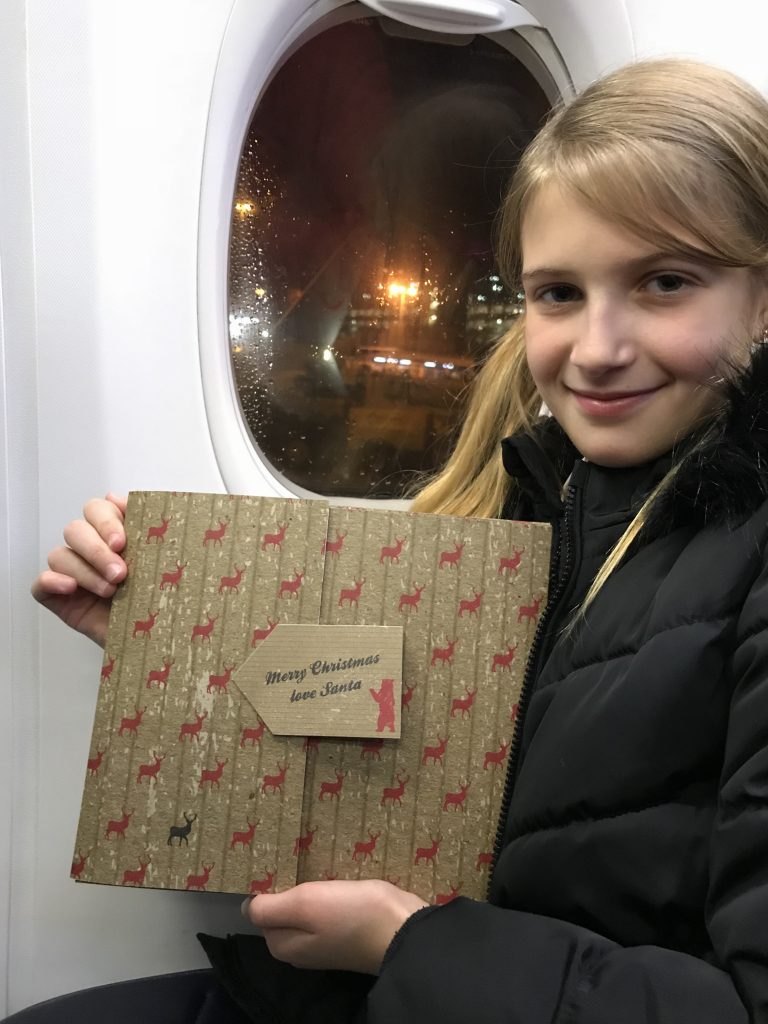 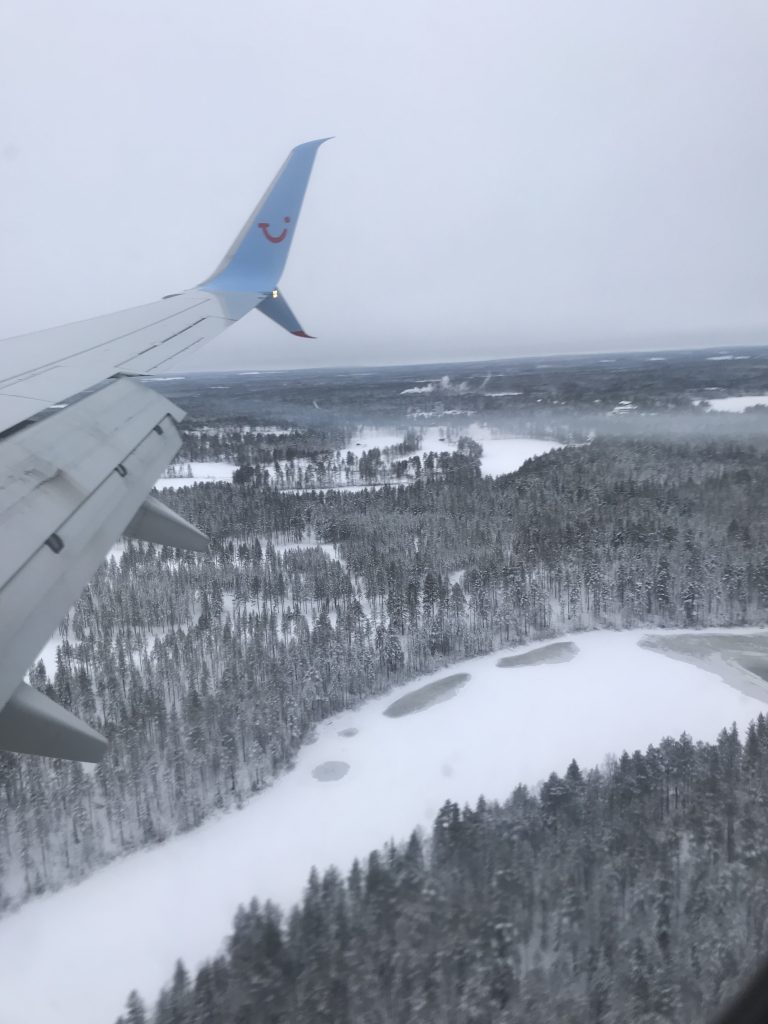 We chose our hotel based on its location and facilities and it didn’t disappoint.

The grounds were fantastic for sledding (they even had an abundance of free sledges you could use) and there was a fantastic pool, pub, 10 pin bowling alley and an activity park.

You can check it out here:

TUI provided all our winter gear, which included a not so flattering snow suite (at least we all looked the same lol), snow boots, thick woolly socks, fur lined hat (i chose not to wear this as it was real fur), balaclava and thick waterproof mittens.

All we really needed was some thermals and base layers and we were good to go. 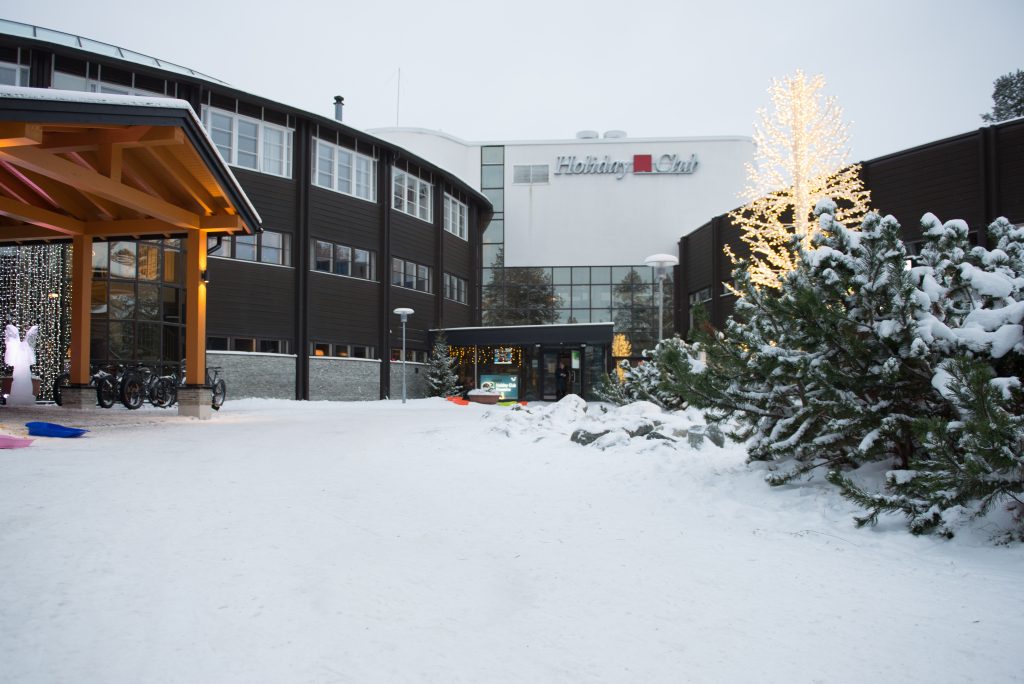 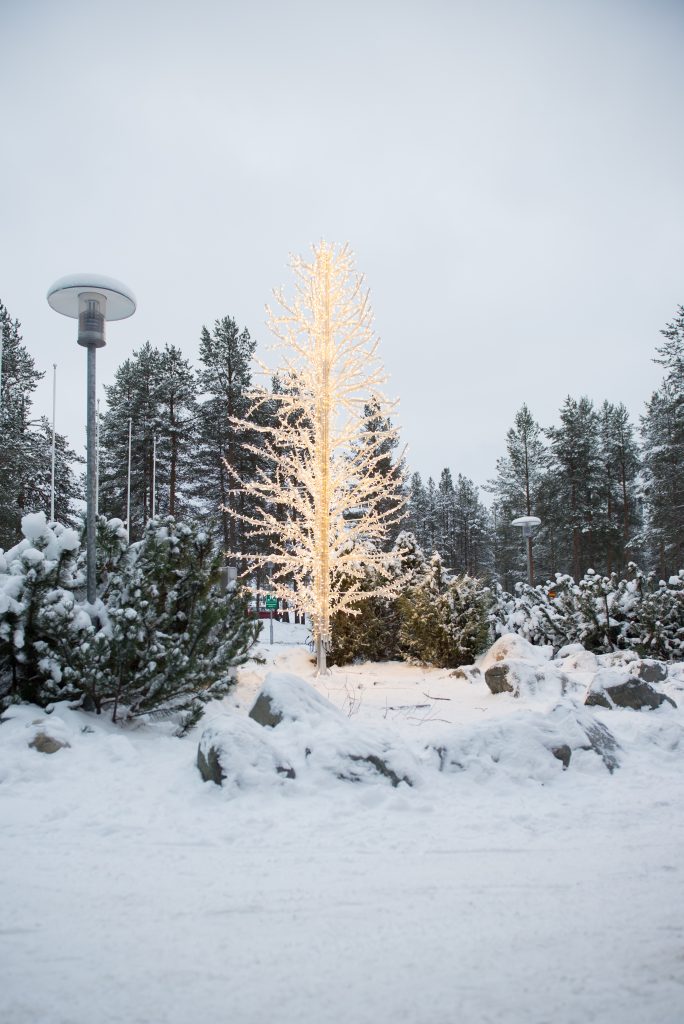 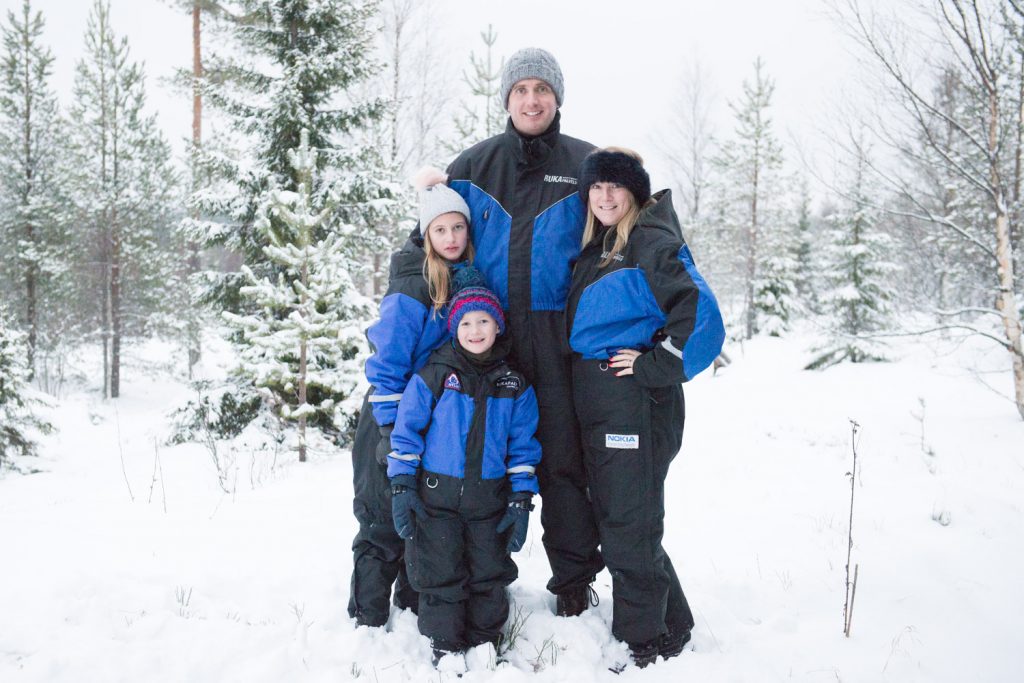 Winter gear that was provided (except the hats)

This was our arrival day so we spent it exploring the grounds and sledging.

Let me tell you an interesting fact about Finland. In the winter it get dark really early and gets light really late. It really messes with your head.

It didn’t get light till around 11am and started getting dark at 2pm. By 3pm its as dark as 6pm in the UK.

We had been up at 3am that morning so we had a much needed early night.

This day was all about snow sports.

We had taster sessions of Snowmobiling and husky sleigh rides. 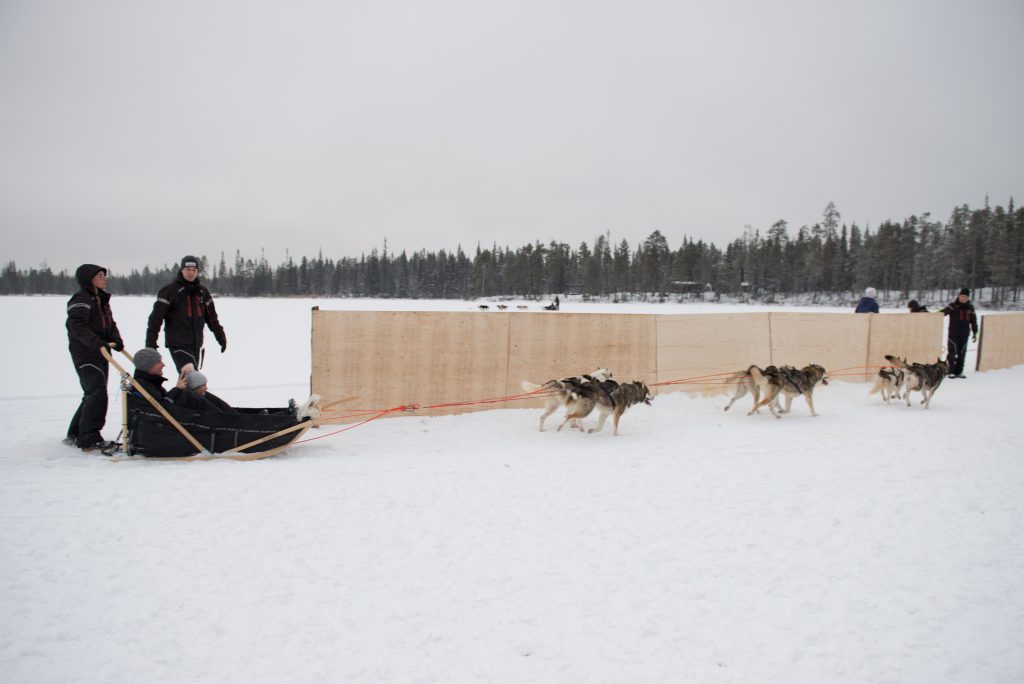 We then had fun sledging, building snowmen and hand feeding the reindeer with the elves. 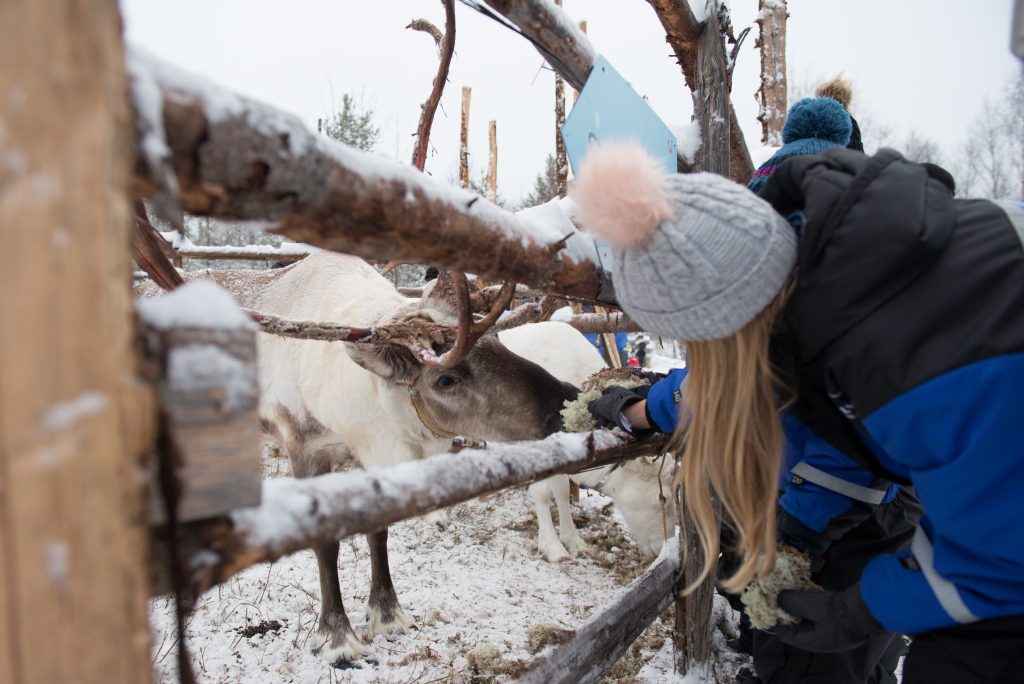 We toasted marshmallows over an open fire and drank warm berry juice. 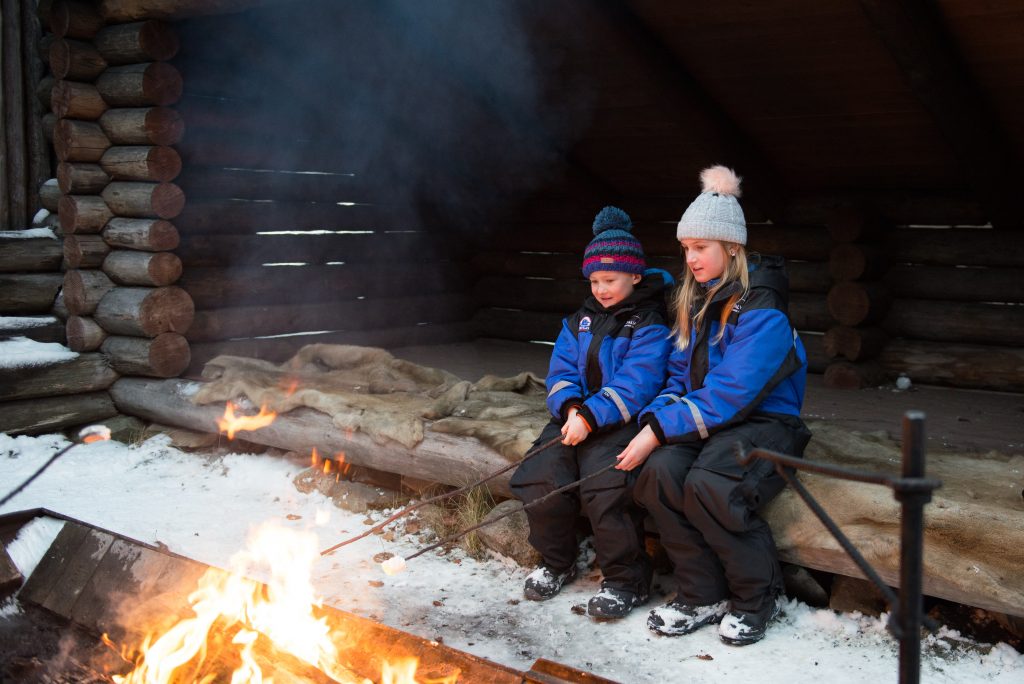 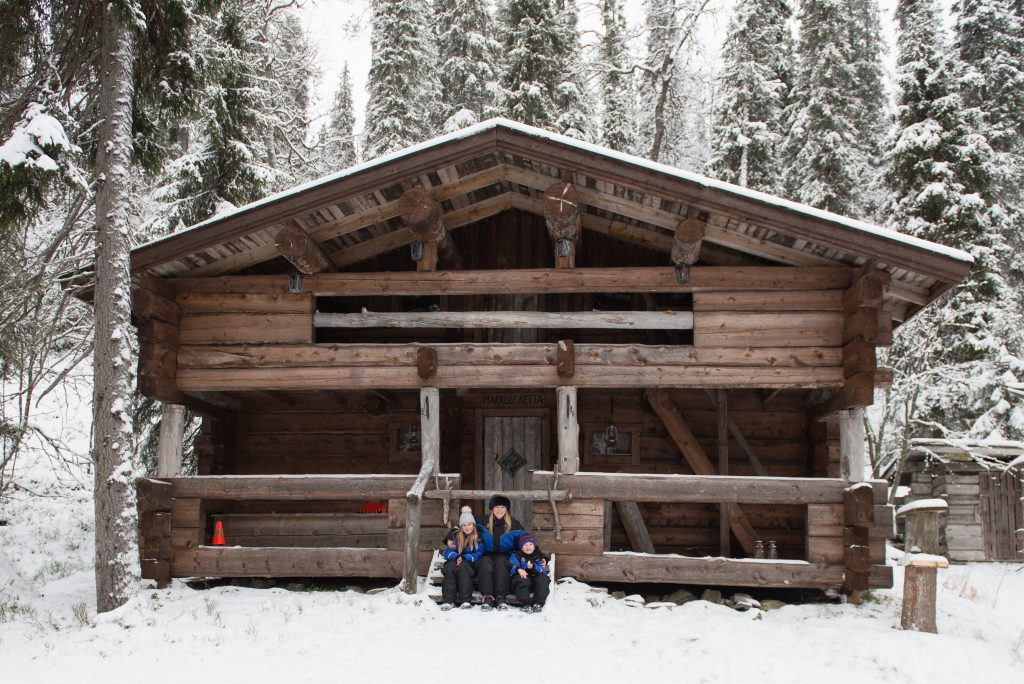 Lunch consisted of either chicken or vegetable soups and a bread roll. This was delicious and was better than I had anticipated, even the kids ate it.

In the afternoon we had some free time so the kids opted for swimming.

That evening we ate in the pub and played 10 pin bowling (I won just in case you are wondering – I beat Simon by 1 point lol, I think he was in shock).

Today we got to go on our optional excursions. We chose to do the reindeer and husky combo.

Unfortunately as we were the only family doing it TUI cancelled it. However after speaking direct with the place who were running it (god bless the internet) we managed to get it to go ahead and as a bonus we got the place all to ourselves.

We cuddled 9 week old husky puppies (i did try to sneak one in to my bag but they noticed) and played with them until they were all tired out. 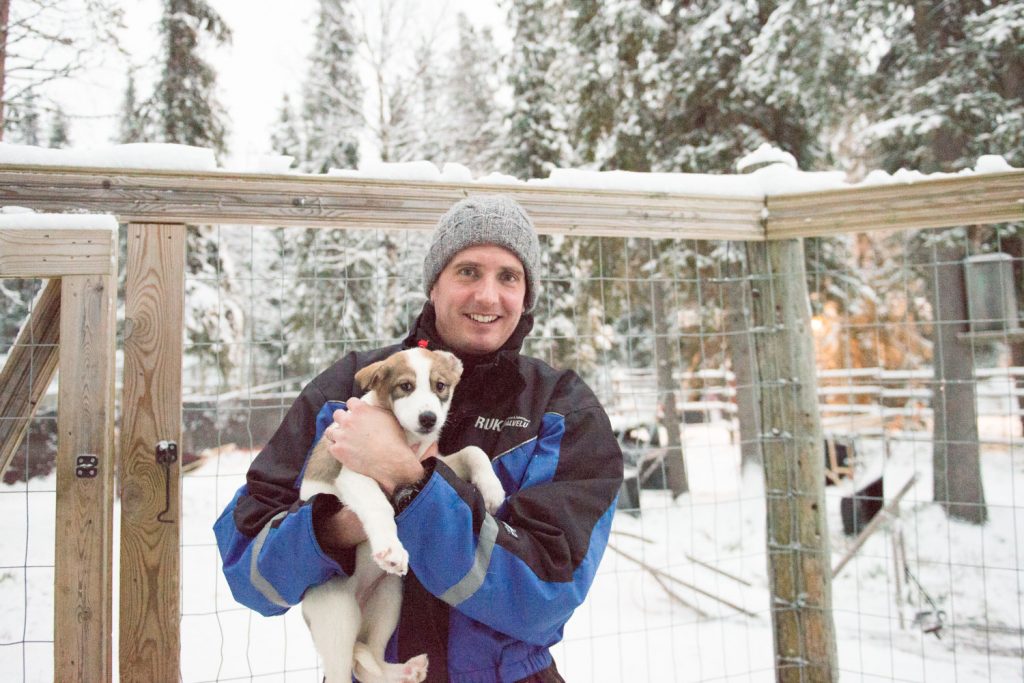 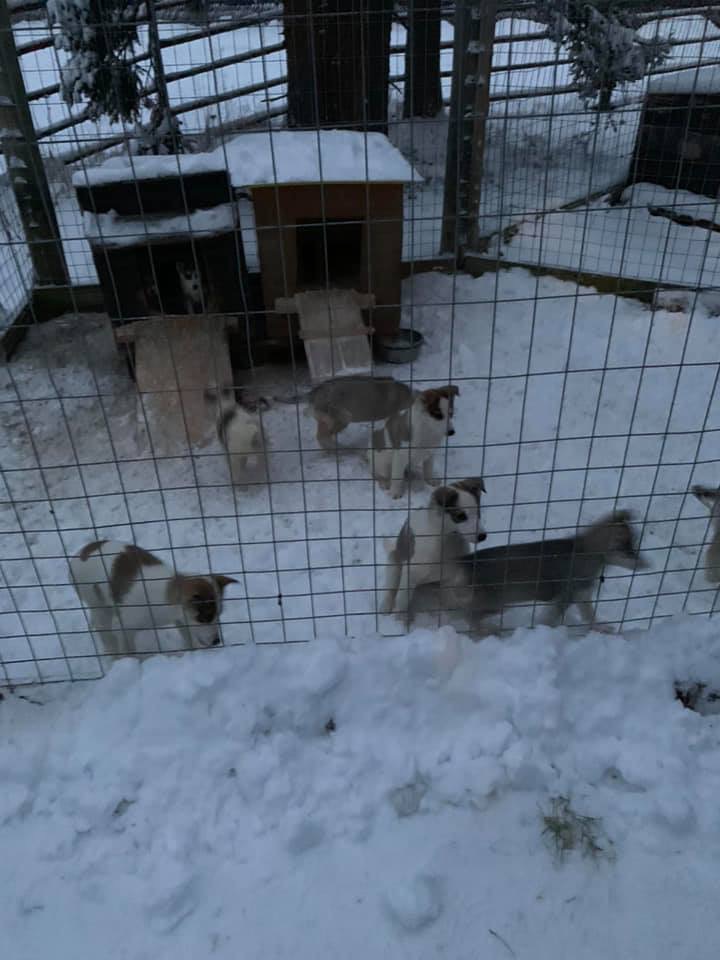 Now something we weren’t expecting was that 3 of us would be in the sledge and one driving it.

OMG I thought Simon was going to have a heart attack!

The lovely lady went through everything that he needed to do and told us not to worry. I can tell you now, I was scared lol.

We needn’t have worried, there was a guy on a snowmobile in front that the dog followed so Simon just had to remember when lean and break.

Ive never laughed so much in my life. It was amazing and to see the look on the kids faces was priceless.

Next we went on our reindeer sleigh ride. This time we left the driving to the professionals and sat back and enjoyed being pulled around the beautiful winter wonderland. 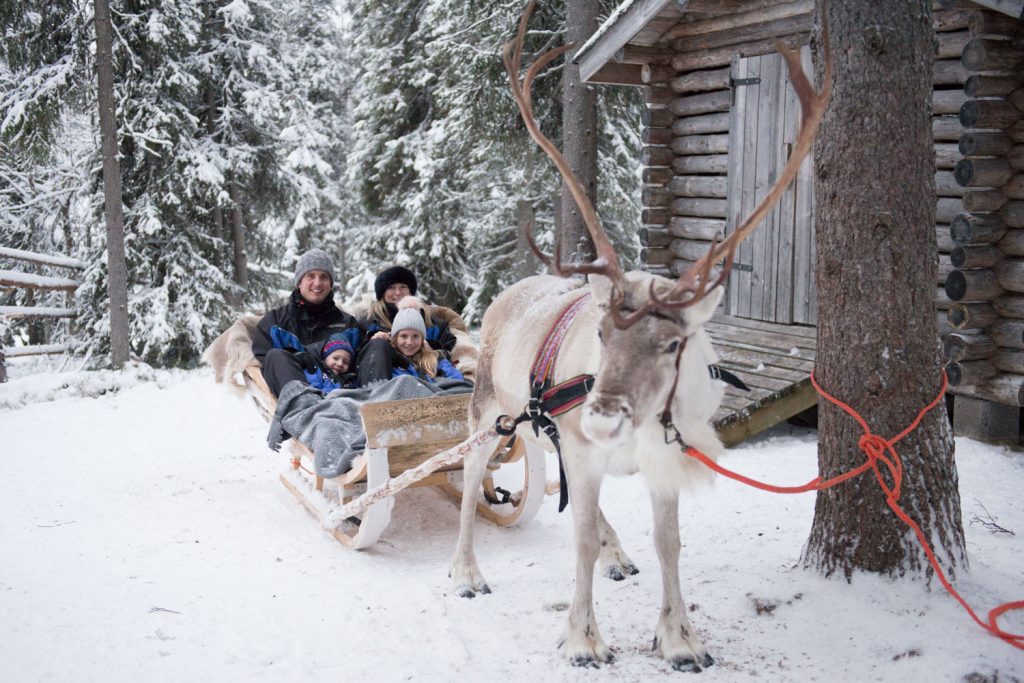 It was magical and both us and the kids really enjoyed it.

Next up was feeding the reindeer. 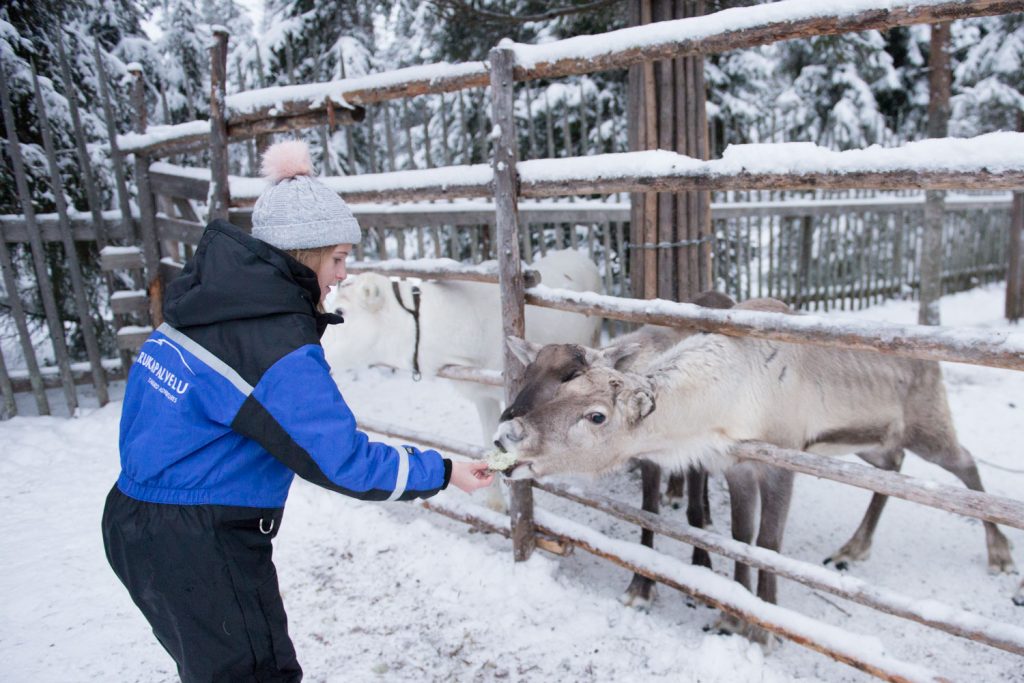 This consisted of us having loads of moss (Lichen) in a basket and feeding it to them by hand.

Oh the kids loved it, they even begged the keeper to get some more (which she did) so they could make sure they all had some.

After a quick snack we purchased some souvenirs, the kids spent their pocket money on a stuffed husky and reindeer and i got some special Christmas decorations.

This was the main event. We were off to meet the big man himself.

We were taken to his secret cottage and got to go sledging and play games with the elves. 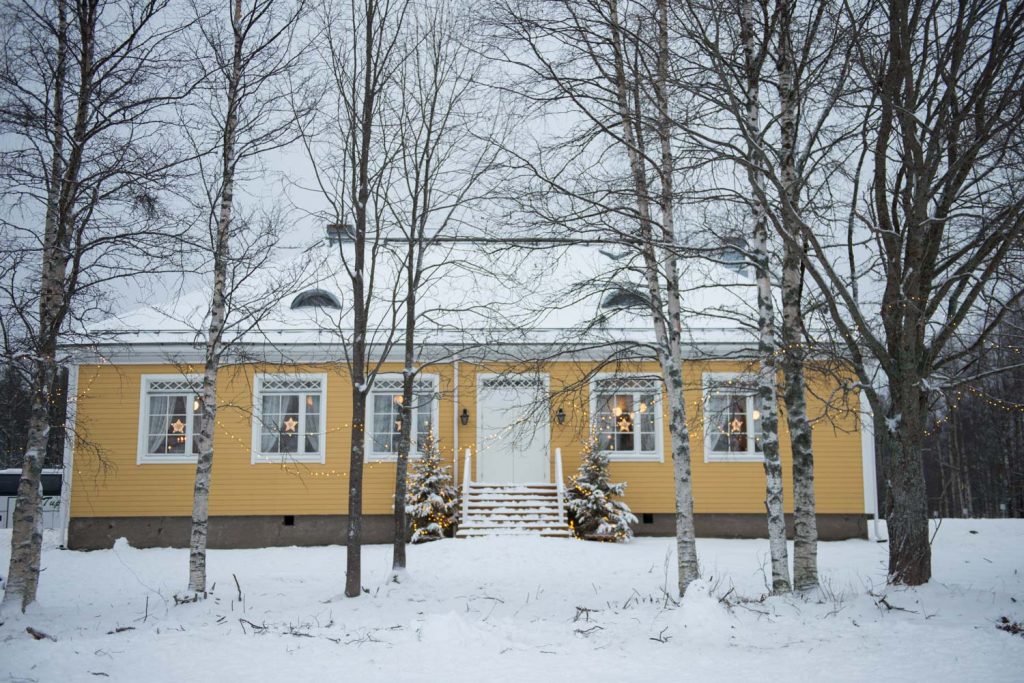 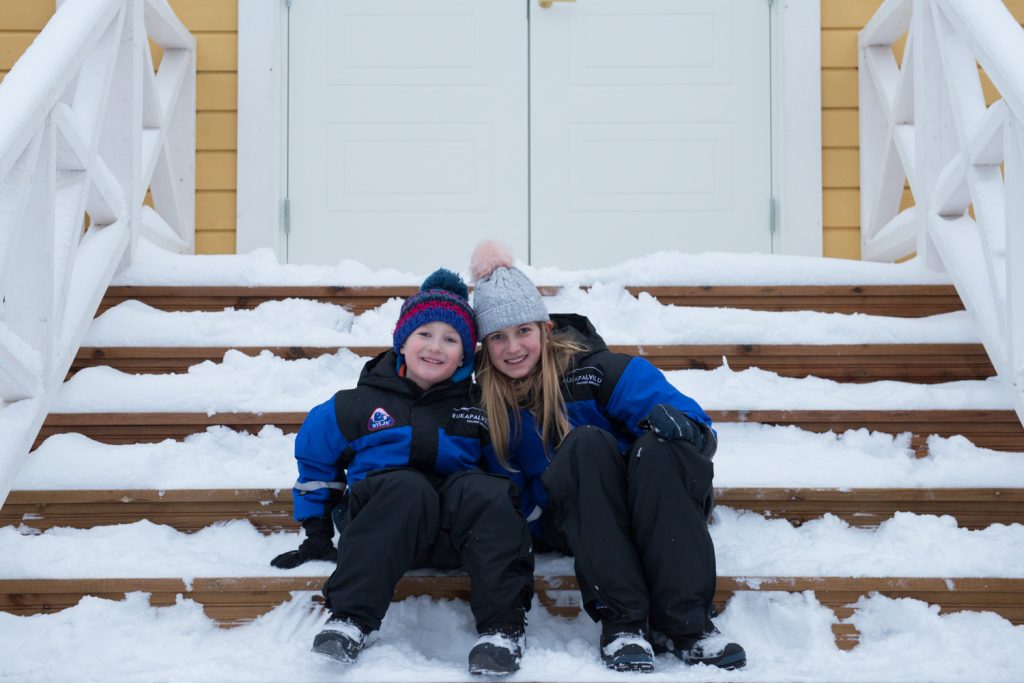 Freya and Aric built an tiny igloo and we sat around a fire drinking warm berry juice.

We were then taken in to Santas cottage and sat in a room with Mrs Clause.

The Children had to sing a traditional Finish Christmas song to call Santa, as he was busy working at his toy factory 300km away.

Just like magic after the 2nd attempt at the song, Santa arrived with a sack full of gifts for the children. 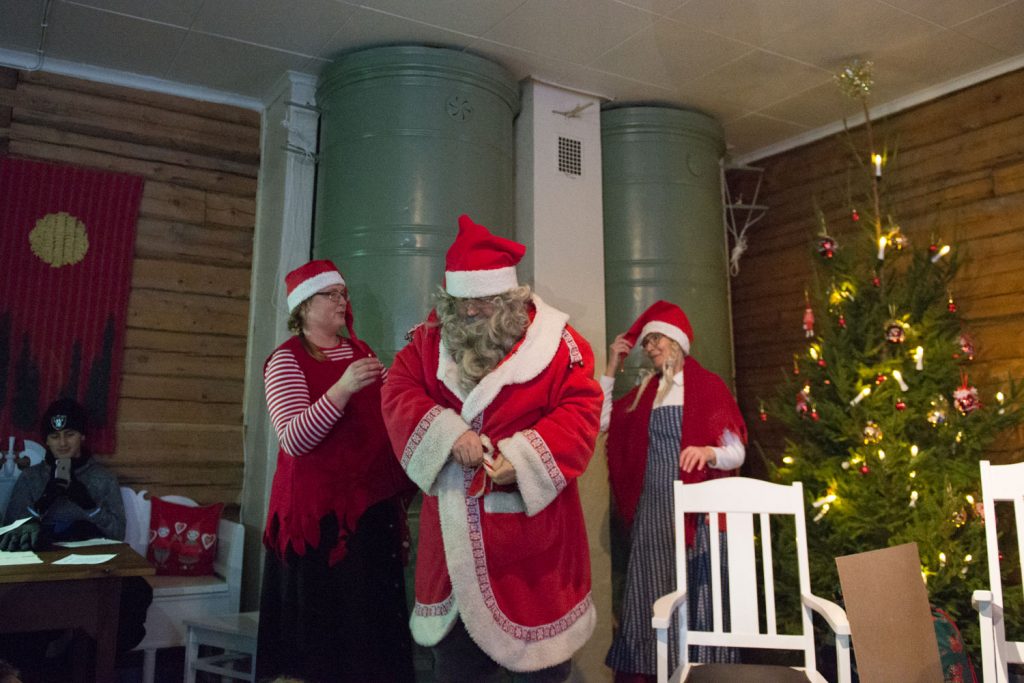 Santa told the children a story about his life and why he had to move his operations from the North Pole to Lapland (mainly because the food was so bad, all they had to eat was fish and the elves were getting cranky). He explained why they only had 3 hours of sunlight in Lapland and asked the children lots of questions. 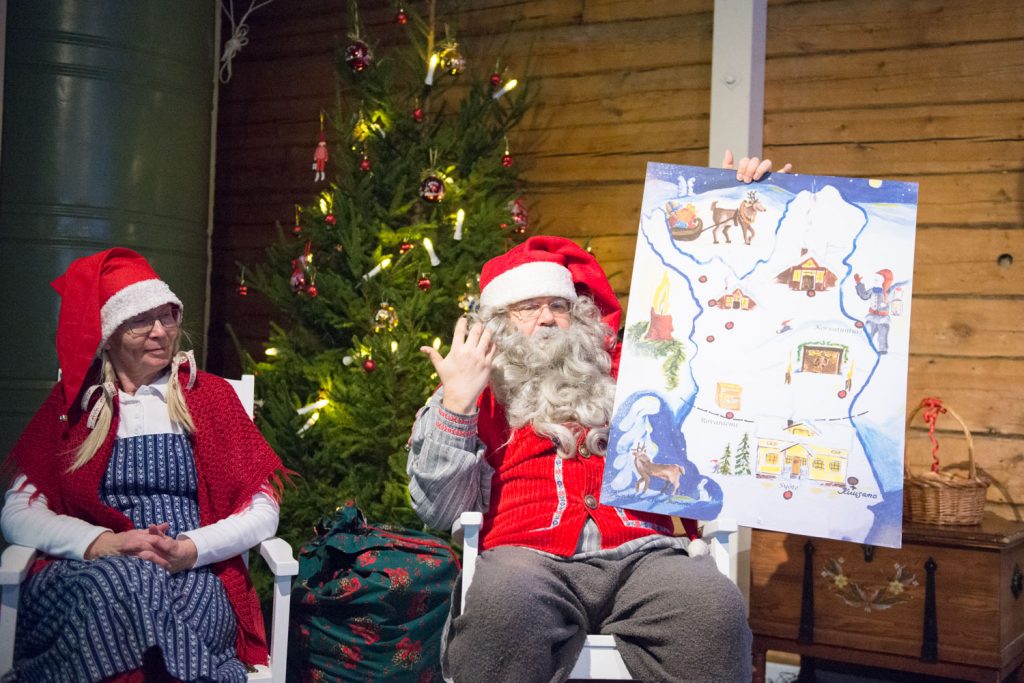 Each child was made an honorary elf and given a special elf hat and gift from Santa and we got to take their photos. I had heard that some places take the photos and then charge you for it, but thankfully not here (i did have my lovely pro camera with me so I was happy). 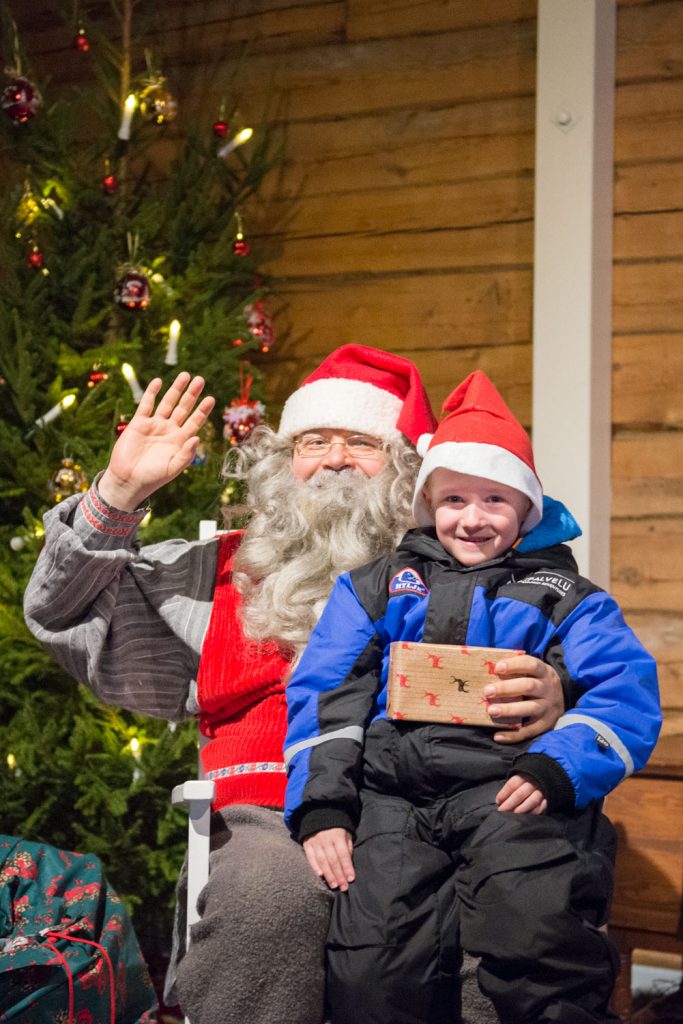 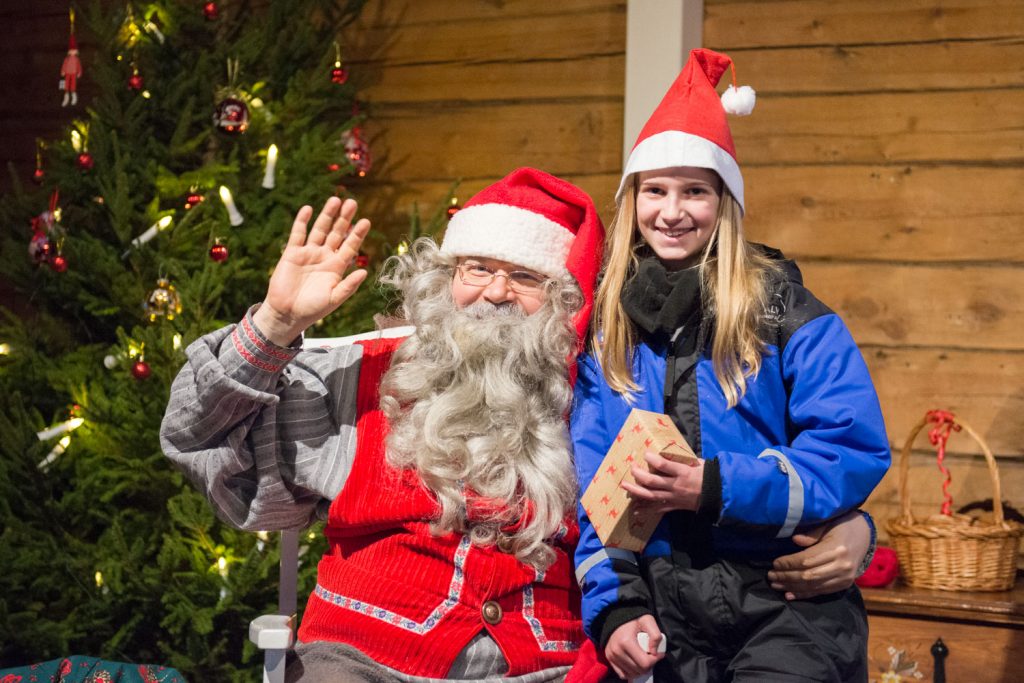 We also got to have family photos too. The poor TUI rep looked petrified as I handed my camera over lol, but she did good. 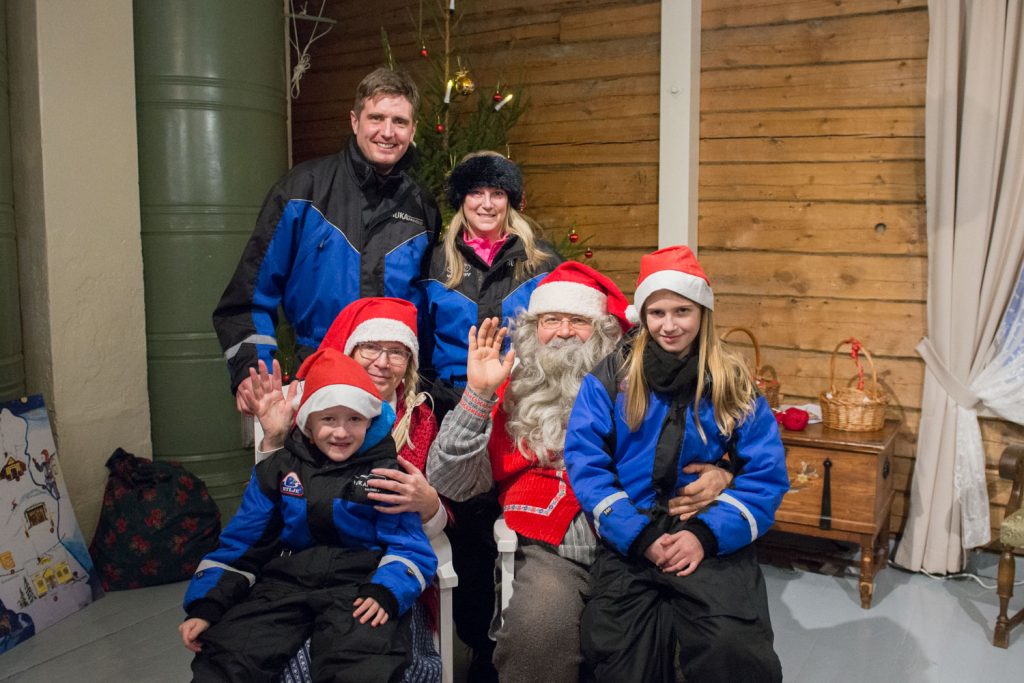 More special Christmas decorations were purchased well I couldn’t leave with out buying something from Santas cottage. I mean how many people can say they have Christmas decks from the real Santa house (I brought one for my mum too).

As we boarded the bus to go back to the hotel santa and mrs Clause came out and waved us good buy.

Later that evening the TUI reps collected us to go for our gala dinner and fireworks.

This was amazing, honestly the wooden hall looked like something out of a Viking movie.

All the tables were se with candles, it was truly beautiful. 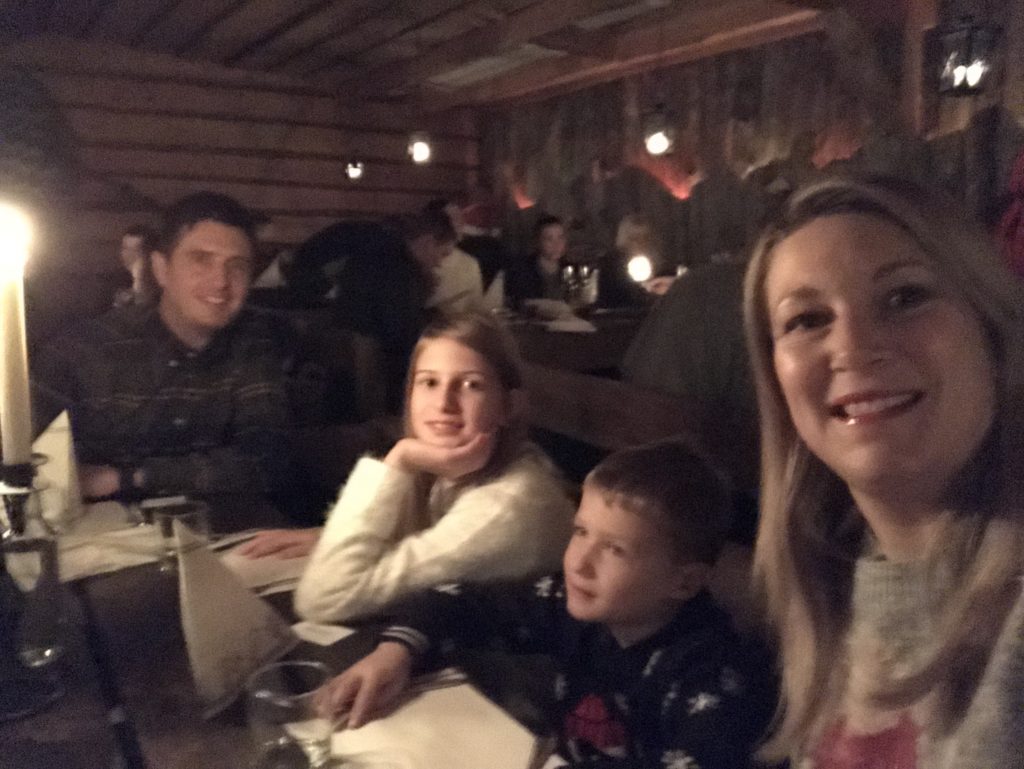 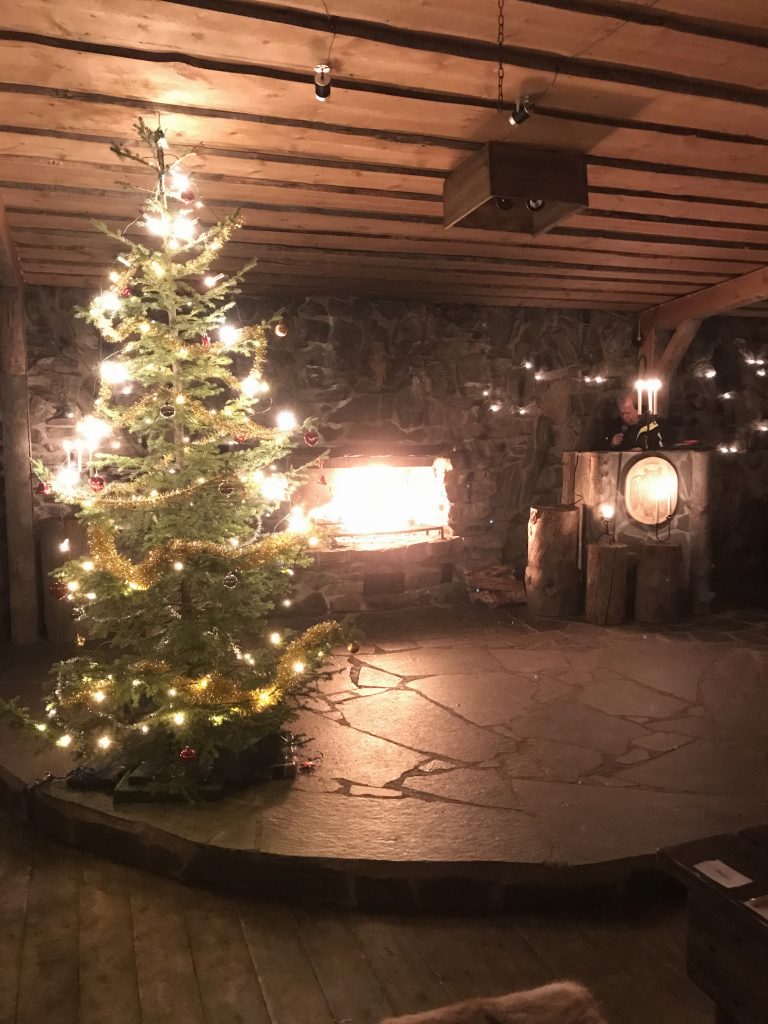 The reps played festive games, there was a Christmas jumper competition and the kids were given activity packs.

The evening finished off with fireworks out in the woods.

Overall a brilliant evening and one we are not likely to forget.

The only downside was the loos.

Think I’m a celebrity dunny! A bucket with a black bin liner in and a toilet seat!

In fact by time i needed it, it was so rank i chose to hold it until we got home or i could find a bush. 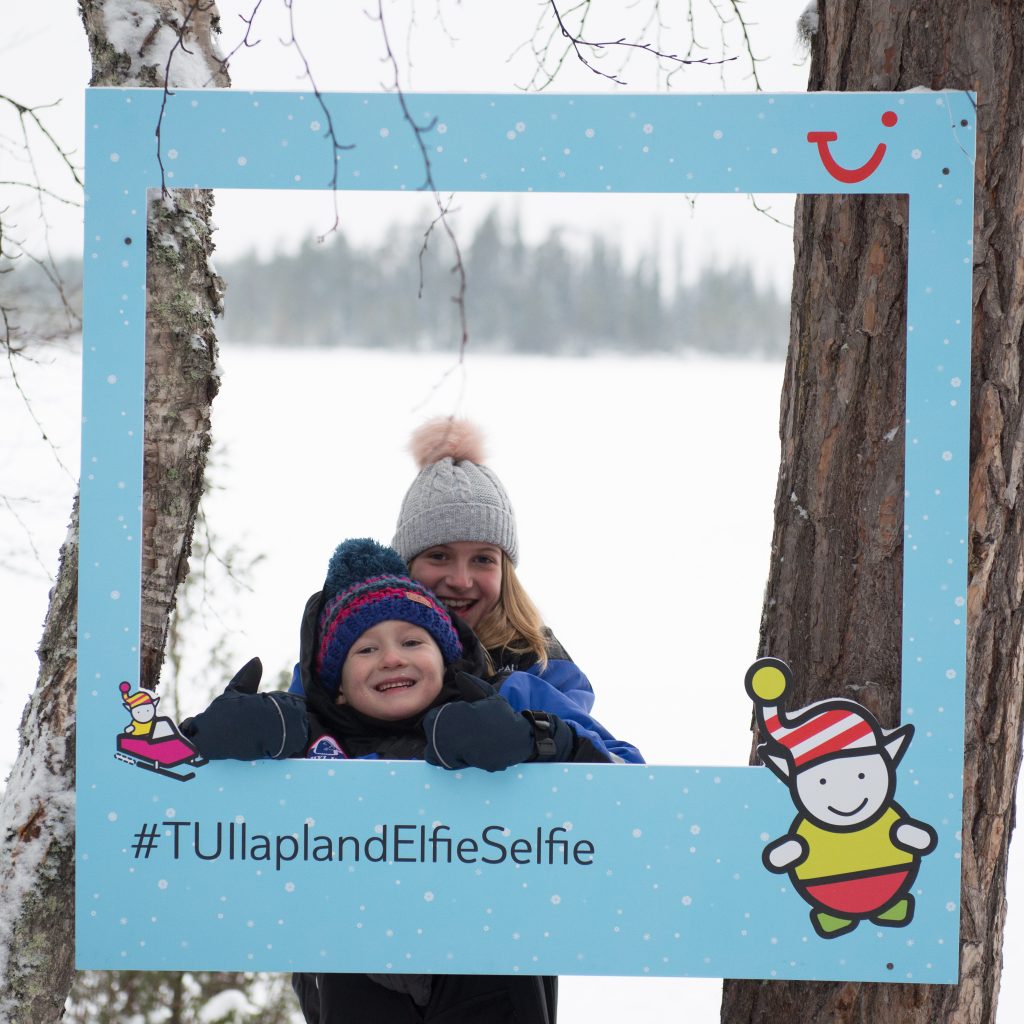 We have made so many memories as a family, ones that we will cherish forever.

I can hands down honestly say that this was the best experience ever and worth every ounce of stress (from snow gate) AND WORTH EVERY PENNY.

If you decide you would like to go, do book though a reputable agency, even if it cost a bit more.

Ive heard so many horror stories about companies going bust and people getting no help when we had snow gate.

Oh and as global warming is a given, snow gate might happen more often so book as late in December as you can.